Beja people are one of the living descendants of Ancient Egypt

The Beja people of north east Sudan and southern Egypt are living descendants of Ancient Egyptians. If you ever wondered from all the controversy what the Ancient Egyptians look like take a good look. They are a true representation of ancient egyptians.

Note most of the people of modern Egypt are descended from Arabs who invaded in the 7th centuary and whiten the population. The language the Beja people speak is the closest language to that of classical Egypt.

The Beja are said to be the Medjay soldier class originating in Ta-Seti as the archers called into service during the 12th Dynastic Period.

Their Beja name is said to derive from the municipality founded by Amenemhat I called Amenemhat-It-jawy or Itjawy or Bedjawi or Bejawi (another modern name for Beja).

Amenemhat I created an army from his mother’s home town of Ta-Seti and the Beja are said to be those warriors-for-hire and their name is derived from the municipality Amenemhat I founded. 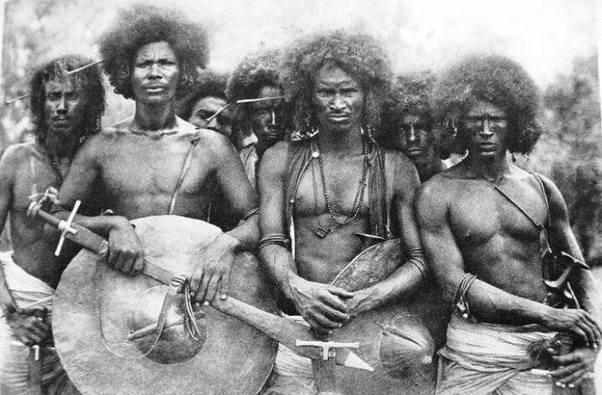 Historically, the Medjay date to before the 12th Dynasty and from the Old Kingdom fought against ancient Egypt on the side of Kush, then switched back and forth between ancient Egyptian and Nubian alliances ending during the Roman era in which they sided with the Romans against the rulers of Meroe.

In the Roman era, they were known as the Blemmyes. Much later, Rudyard Kipling referred to them as “Fuzzy Wuzzies” because of their tiffa (afros) hair style.

The Beja themselves name themselves after whatever land they reside upon and presently span from Sudan and Egypt into Eritrea and Ethiopia and even Yemen. They are traditionally pastoral but some are nomadic.

The Beja may also be a link to the Kushite expansion into Mesopotamia as it was Henry Rawlinson who deciphered cuneiform using Ta Bedawi not a Semitic language.

It was Rawlinson who said the language of the Kushites spanned from West Africa through Western Asia to India.

Important to note that ancient Greeks often referred to Babylonians as Ethiopians. So the link between African Semitic and Western Asian Semitic most likely involves the Beja and their Kushitic language influences.

The Beja may also be a link to the Kushite expansion into Mesopotamia as it was Henry Rawlinson who deciphered cuneiform using Ta Bedawi not a Semitic language.

It was Rawlinson who said the language of the Kushites spanned from West Africa through Western Asia to India.

This migration of the Beja may explain why there is correlation between Western Asian and Horn of Africa languages to Kush-Kemetic languages.

Ancient Egyptians identified by the land (nomes/villages) they were from and not by any specific ethnic name.

Vintage Beja photo. Man has a curling stick in his hair which are used by Beja as well as Afar ethnic groups and are used to create various twist and curl hairstyles. The Curling Stick is also an ancient Egyptian artifact.

Modern-day Beja with a Bilbil

From the tomb of Nakht

Such fowl hunting with a stick scenes can be seen in The Tomb of Nakht, 18th Dynasty. (Theban Tomb TT52) Nakht was a scribe and his wife Tawy was a musician.

Art and the Fulani/Fulbe People

Fulani ArtBecause Fulani nomads do not change their fashion as frequently as other sedentary groups, traces of past aesthetic traditions tend to be perceptible in contemporary times. Fulani often entrust members of specialized castes or foreigners with the fabrication...

The Age of Iron in West Africa

Department of Arts of Africa, Oceania, and the Americas, The Metropolitan Museum of Art October 2002 Iron smelting and forging technologies may have existed in West Africa among the Nok culture of Nigeria as early as the sixth century B.C. In the period from 1400 to...